The Salt In Our Waters

An artist leaves the bustling Bangladesh capital Dhaka to relocate to a coastal village on the Bangladeshi delta for inspiration. Welcomed by the local fishermen, the artist’s modern ideas and sculptures enchant the local chairman and the children, but not all welcome his modern approach with such open arms. Against the backdrops of environment change and the rising tide, some villagers accuse him and his works of having provoked disastrous weather patterns.

"The constant roar of wind and water is a reminder, whatever your religion or politics, nature doesn’t bend to the laws of man."

"Sumit's strength at this stage of his career clearly lies in exhibiting the details of people's lives and their everyday existence." 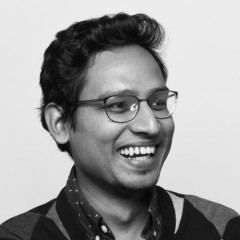 Sumit was born and raised in Bangladesh's boisterous capital Dhaka. City Life, a docu-drama he shot entirely on a friend's handy-cam, earned him a place at the prestigious Berlinale Talents 2008 as an up-and-coming director.