Tonia Mishiali is a director, scriptwriter and producer. She is a member of the European Film Academy, the European Women’s Audiovisual Network, Berlinale Talents alumna, and one of the artistic directors of Cyprus Film Days International Film Festival, having also served as vice president of the Directors Guild of Cyprus board.

Tonia was born in Famagusta Cyprus. She graduated from The English School, Nicosia, a private English speaking high school in Cyprus, and then moved to Oxford, UK to study Hotel & Catering Management, only to find out that her true passion was film; she therefore proceeded to achieve a BA(Hons) in Media Production. After her graduation she moved back to Cyprus to start working as a director and producer, at the same time creating her own production company Zipcode production&design.

She loves experimenting with different mediums- she has directed and produced for theatre, film and television in Cyprus and abroad, dealing with a variety of subjects, but focusing mostly on social and women’s issues. She has exhibited her work and participated in a big number of national and international film and performance festivals.

Her short film Dead End (2013) has won several Best Film and Best Director awards and over 40 nominations for the film’s official selection at International Film Festivals all over the world, including the Golden Pardino-Leopards of tomorrow at the 66th Locarno Film Festival in 2013, where the film had its World Premiere. Other prestigious Festival official selections include Palm Springs, Busan, Cork, Encounters and Drama Film Festivals. Dead end is represented by SND Films (Amsterdam) and has been sold to Japan, China, USA, Belgium, Russia and France. Her short film Lullaby of the Butterfly (2014) was officially selected at the 20th Sarajevo Film Festival for its World Premiere in August 2014 and won Best National Film and Best Cinematography Awards at The International Short Film Festival of Cyprus in 2014. It has been officially selected in more than 20 International Film Festivals worldwide, including Encounters, Dresden and Drama Film Festivals. Her directorial debut feature film Pause (2018), a Cyprus/Greece co-production and represented by Film Republic (UK), has been officially selected to make its world premiere at the 53rd Karlovy Vary IFF.

She is now developing her second and third feature films Nala and Hambis and the goblins the latter of which is being developed through Sources2 scriptwriting workshop of Creative Europe, with script development funding from the Cyprus Ministry of Education and Culture.

As a producer, she is now working on the feature film The Islander by director Stelana Kliris, also funded by the Cyprus Ministry of Education and Culture and developed through EAVE Producers Workshop. She has also produced and co-produced several short and feature films and has worked on numerous film productions as 1st Assistant Director and Production Manager. She has also exhibited her photography work many times over the years and won numerous awards in national and international photography competitions. 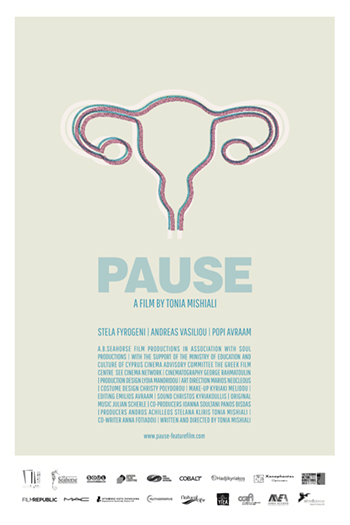